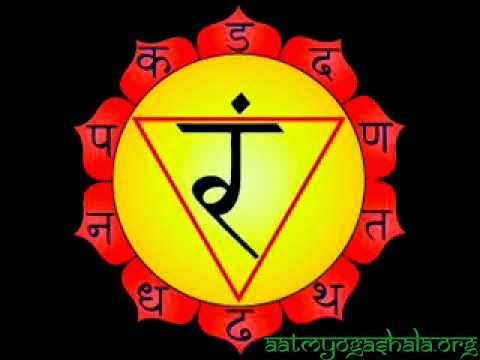 The Manipūra Chakra is a sacred power. It is the flame of life into which the Yogi sacrifices not only his food, but also his conscious breathing (Prānāyāma). When we understand that the taking of food and oxygen are acts of giving not taking, then these activities acquire great spiritual significanc The third chakra is represented in the central nervous system by the solar plexus, where all nerves merge to form the "second brain." Of its ten petals, five face up and five down. Correspondingly, depending on how the energy is flowing, the forces of willpower from this chakra add power either to worldly consciousness through the first two centers or to spiritual consciousness through the fourth and fifth centers. When awareness is confined to the realms of memory, reason and aggressive willpower, men and women are instinctive in nature. They are quick to react and retaliate, quick to have their feelings hurt and quick to pursue the conquest of others while fearing their own defeat. In these states of mind, the ego rises to its greatest prominence, and emotional experiences are extremely intense.
Posted by Amit_yogi_rishikesh at 11:07 PM

Email ThisBlogThis!Share to TwitterShare to FacebookShare to Pinterest
Labels: The Manipūra Chakra is a sacred power