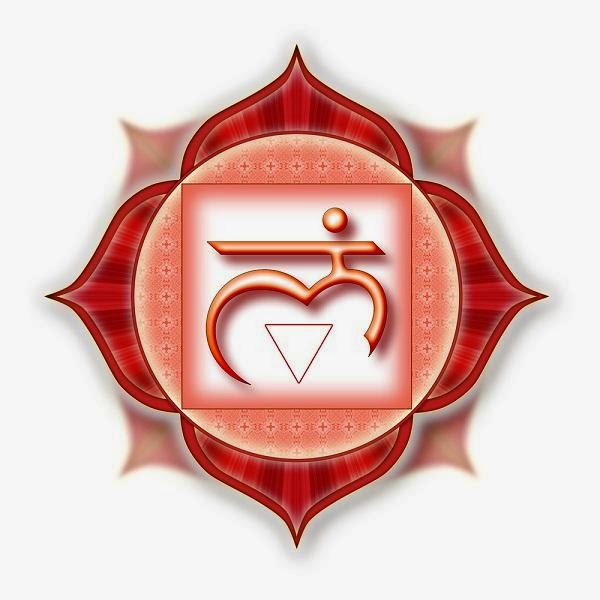 There are seven chakras, or energy centers, in the body that become blocked by longheld tension and low self-esteem. But practicing poses that correspond to each chakra can release these blocks and clear the path to higher consciousness.
"The first centre is called the Muladhara centre. It has four petals (sub-plexuses), is placed below the triangular bone, and is responsible on the physical level of the manifestation of the pelvic plexus which looks after all our excretion, inclusive of sex activity. When the Kundalini rises, then this centre becomes inactive in the excretion functions but active in the support of the rising of the Kundalini. Though the Kundalini has to rise through six centres, the first centre of Muladhara protects the purity of chastity of the Kundalini at the time of its awakening
Mūla = Root, Origin, Essence
Ādhāra = Basis, Foundation
Just as the womb of the mother creates the basic requirement for the growth of the embryo, the Mūlādhāra Chakra forms the basis and the starting point for our spiritual development. It is the foundation from which we climb the ladder of the Chakras; the root from which we receive the nourishment for our spiritual development. For this reason, and because it lies at the lowest point of the spinal column below the Coccyx, it also bears the name “Root Chakra”.
chakra systemThe chakra system provides a theoretical base for fine-tuning our yoga practice to suit our unique personality and circumstances. Traditionally, Indians saw the body as containing seven main chakras, arranged vertically from the base of the spine to the top of the head. Chakra is the Sanskrit word for wheel, and these "wheels" were thought of as spinning vortexes of energy.
Each chakra is associated with particular functions within the body and with specific life issues and the way we handle them, both inside ourselves and in our interactions with the world.
There are many yoga poses that can correct chakra imbalances, bringing us back to our body and the earth and helping us experience safety, security, and stillness.

Posted by Amit_yogi_rishikesh at 1:04 AM