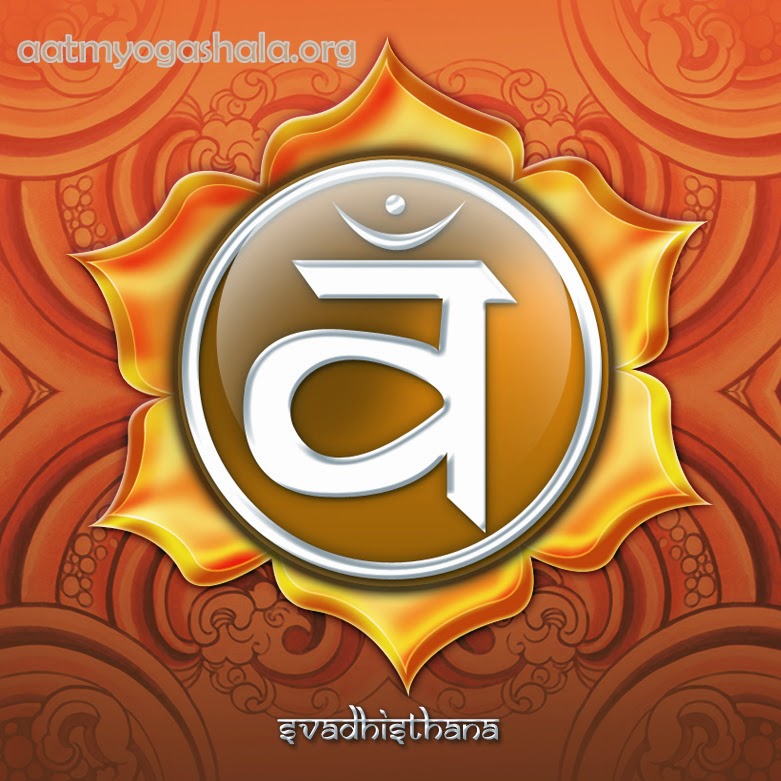 Adhishthāna = seat, residence
Svadisthana Chakra (Hips, Sacrum, Genitals
by yoga asana can awkan chakra .Baddha Konasana, or Bound Angle Pose, is appropriate to balance the second chakra. This hip opener once again brings attention to the pelvic region, where this chakra sits closely to Muladhara. Stretching the groin area helps to release tension in the seat of Svadishtana.
In Sanskrit, the second chakra is called Svadisthana, which translates as “one’s own place or base,” indicating just how crucial this chakra is in our lives.
The animal symbol of the Svādhishthāna Chakra is the CROCODILE. It represents the Karma lying dormant in the subconscious. The crocodile is lazy and lethargic, but once it becomes active it develops enormous power and speed and can be extremely dangerous.
The Svādhishthāna Chakra lies about three centimetres above the Mūlādhāra Chakra between the coccyx and the sacrum. It marks the second stage of human evolvement. In earlier periods of evolvement the seat of the Kundalinī Shakti was located in this Chakra, but in Kali Yuga , our present age, spiritual energy has sunk down into the Mūlādhāra Chakra – into unconsciousness - because of the rampant materialism and egoistic behaviour of humans.
The colour of the Svādhishthāna Chakra is ORANGE, the colour of fire. This colour symbolises purification, activity, joy, hope and self-confidence, and shows that the energy of the Svādhishthāna Chakra has become active. Orange is also the colour of sunrise and is an indication of the strength that blossoms from this Chakra once it has been mastered – cheerfulness, faith, self-confidence and vigour. It is also the colour of autumn and sunset, when nature withdraws and consciousness turns inwards. When we look within and concentrate on the Svādhishthāna Chakra we are able to find the answers to many questions related to our destiny.
Posted by Amit_yogi_rishikesh at 12:09 AM

Email ThisBlogThis!Share to TwitterShare to FacebookShare to Pinterest
Labels: Yoga in rishikesh