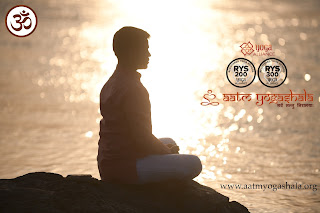 About Aatm Yoga Shala
Rishikesh the land named after the Sages and Saints in the Northern state of Uttrakhand, famously known for the Origin of Yoga which is identified by the Sacred Mother Ganga . According to the history ,Rishikesh is regarded as the gateway to four sacred places named as Badrinath, Kedarnath, Yamnotri and Gangotri, known as four abodes(chardham) the places of Hindu Pilgrimage. People also came to this city to complete their spiritual understanding after renunciation or to practice highest level of penance and discipline. Located close to the most known pilgrimage and holiest city Haridwar, Rishikesh is just an extension of the similar tribe seeking for peace and tranquility, open for all caste, creed & religion.....
The story behind the name of Rishikesh is mentioned in the epic literature Skanda Purana ,which tells us that Lord Vishnu was pleased with the austerities and penance by the sage Raibhya Muni and consented to his request to gain a control over his senses. After which this place was named as Hrsikesa named after the avatar of Lord Vishu ,which was over time changed to Rishikesh. Traditionally also known as the city of saints where individuals have come to experience Moksha ( Liberation).
Situated near the foothills of the Himalayan Range, surrounding you with the energies of the ancient sages who came in search of higher knowledge and gain a wider vision of life,through the practice of Meditation and Yoga. The most famous among which was Swami Sivanandawho arrived in the year 1924 to begin his intense practice of Sadhana and later established his own Ashram which still exists , makes this city a perfect place to start your yogic and spiritual journey. Rishikesh is filled with positive vibes and yoga schools all over to help you gain the insight within yourself. A small city which is divided into two bridges Ram and Laxman Jhula named after Hindu Gods from the holy text Ramayana makes it the sole medium of transportation, below which the holy Ganga flows creating a calm atmosphere. This mesmerizing beauty is the uniqueness of this city .Rishikesh will help you attain the understanding of life through the religious and spiritual practices performed every day by the priest and the locals, starting the day by dipping in the Ganges or seeking blessings from the temples is how the day starts, away from the fictitious world of materialistic desires, the people and the place will help you touch your soul and get you closer towards simplicity and reality. People who visit this place once are sure to revisit it to explore their new self through the yogic and spiritual practices. Keeping intact the foundation of Ayurveda, Natropathy & Astrology the place has a lot to offer to heal and detox , filled with positivity and healing powers you are sure to go back peaceful and rejuvenated with a promise to once again return .
It is not just a city that attracts the Hindu tribe but also the people all over the world, the rich heritage and history brought the most famous English Rock Band; The Beatles in the year 1968.The band arrived to gain the answers of spiritual transformation in the Ashram of Maharishi Mahesh Yogi where they were guided through the steps of Transcendental Meditation. It is here that they composed most of their songs of which the most famous album is The White Album , this epic ashram is still one of the most attractive tourist destination where individuals are still permitted to practice meditation or experience the vibrations
https://www.aatmyogashala.org/about-rishikesh.php
Posted by Amit_yogi_rishikesh at 9:58 AM