The celebration is marked by ritualistic respect to the Guru, Guru Puja. The Guru Principle is said to be a thousand times more active on the day of Guru Purnima than on any other day. The word Guru is derived from two words, gu and ru. The Sanskrit root gu means darkness or ignorance, and ru denotes the remover of that darkness. Therefore, a Guru is one who removes the darkness of our ignorance. Gurus are believed by many to be the most necessary part of life. On this day, disciples offer puja (worship) or pay respect to their Guru (spiritual guide).
In addition to having religious importance, this festival has great importance for Indian academics and scholars. Indian academics celebrate this day by thanking their teachers as well as remembering past teachers and scholars.
Traditionally the festival is celebrated by Buddhists in honor of the lord Buddha who gave His first sermon on this day at Sarnath Uttar Pradesh. In the yogic tradition, the day is celebrated as the occasion when Shiva became the first Guru, as he began the transmission of yoga to the Saptarishis.
Many Hindus celebrate the day in honor of the great sage Vyas, who is seen as one of the greatest Gurus in ancient Hindu traditions and a symbol of the Guru-Shisya tradition.
Vyasa was not only believed to have been born on this day, but also to have started writing the Brahma sutra on Ashadha Sudha Padyami, which ends on this day. Their recitations are a dedication to him and are organized on this day, which is also known as Vyasa Purnima.
The festival is common to all spiritual traditions in Hinduism, where it is an expression of gratitude toward the teacher by his/her disciple. Hindu ascetics and wandering monks (sanyasis), observe this day by offering puja to their Guru, during the Chaturmas, a four-month period during the rainy season, when they choose seclusion and stay at one chosen place; some also give discourses to the local public.
Students of Indian classical music and Indian classical dance, which also follow the Guru-Shishya Parampara, celebrate this holy festival around the world. 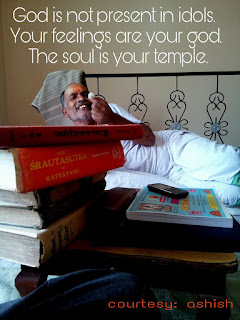 Posted by Amit_yogi_rishikesh at 2:27 PM